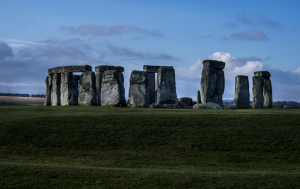 Among the Ancient Stones, Magic as Potent as Ever

Stonehenge at Dawn, Inside the Circle